Food & Drink Lifestyle Top 10
Mention Spanish beer to most and the usual suspects which litter tap handles across this fine land spring to mind.

Pale yellow fizzy stuff which is served at arctic temperatures and quaffed without so much as a passing thought to taste. If it bubbles, has something near 5% ABV and says beer in the description, it must be ok.

But is it? Are we missing a trick by accepting, mostly blindly and without question, that this is all that beer has to offer?

The craft beer tsunami which has been sweeping the world has finally arrived in Spain, bringing beer geeks and hop heads out of hiding. It might have taken its time, but it was worth the wait. From tiny isolated pockets a few years ago, Spain now boasts one of the fastest growing craft scenes in Europe. Admittedly, it is from a low base, but the beer lover is now spoiled for choice.

You know a country is on the craft beer map when the mega corporates start buying into the market and snapping up the leading independent brewers. This, unfortunately, poses questions as to who is craft and who is simply crafty. As an ex-brewery owner, brewer and beer judge, I have mixed feelings when ABInBev or the like take a stake in a local craft brewery. Will the brewery maintain their focus or become part of the machine that the craft industry is supposedly dead set against?

Last year is significant for the fact that the aforementioned ABInBev bought all the shares in the Madrid based La Virgen. Molson Coors also got into the act by taking a majority stake in, one of my favourites, Cervezas La Sagra, from Toledo. While I understand the rationale of the owners securing their financial future, it is a little sad that these pioneers are being sold off. It remains to be seen if the breweries can retain their edge or succumb to the pressures of being forced into the efficiencies demanded by the parent bean counters. One thing is certain; you will no longer find these beers on the taps at El Grifo, Marbella.

So that begs the question, what will you find on the taps? 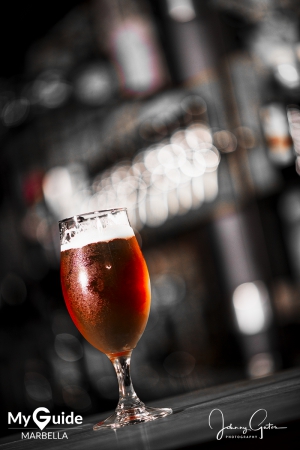 One brewery which is almost always present is DougallÂ´s from Cantabria. I say almost as the taps change and rotate often, with new experiments and old favourites being represented in equal measure. DougallÂ´s has been a crowd favourite from the beginning. True to their craft origins, the range of beers defies their capacity, so they are sometimes unavailable.

The Happy Otter, American Pale Ale, sells phenomenally well at the bar, which is unsurprising. It is particularly suited to our coastal lifestyle. With a citrusy zing which is crisp and clean, while still keeping the requisite resinous, piney and fruity characteristics of the style, it is a beer which begs you to have another.

The first thing to hit your nose is the delicious aroma from the Citra, Chinook and Mosaic hops. The malt character is subdued but present underlying the hops forward style. Fruity esters abound and have been described as apricot, melon and grapefruit.

The light amber liquid supports a dense ivory head which lasts well, offering a fine lacing of the glass. The reason the retention of the head is important is that it shows the conversion of the proteins was done efficiently in the brewing of the beer. It also draws the aromas from the beer in the fine bubbles of CO2 and releases them for your pleasure on the approach to the glass.
The moderate carbonation does not cause you to feel bloated and contributes to a medium bodied beer that is exceptionally easy to drink. The bitterness is pronounced, but never intrusive; a mark of a well brewed APA.

Next time, I will be talking about beers a lot closer to home. La Catarina is a well established, rocking brewery right here in La Campana, Nueva Andalucia. And yes, some of their beers are always on our taps.

Come on down to El Grifo Craft Bar and we will happily walk you through a tasting selection of the beers and gins available.